Skip to main content
Jodi Eichler-Levinen embarks on an interdisciplinary project that explores how quilting, crafting, creative writing, music, and other generative parts of life are deeply interwoven with Jewish women’s ethnic and religious experiences 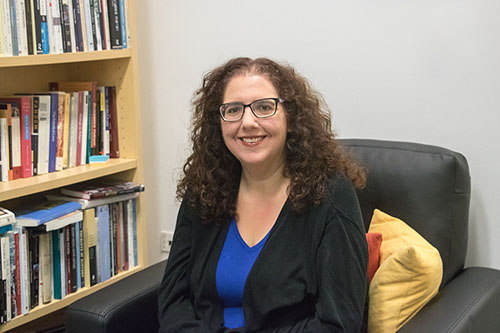 For many people, the process of quilt making is a practical exercise, ultimately to provide warmth from the cold. But the creative process can also have spiritual connections and Jodi Eichler-Levine has embarked on an interdisciplinary project that explores how quilting, crafting, creative writing, music, and other generative parts of life are deeply interwoven with Jewish women’s ethnic and religious experiences.

As part of a book project, titled Crafting Judaism: American Jewish Women and Creativity, Eichler-Levine is conducting interviews and participant observations nationally with Jewish women. Eichler-Levine, associate professor of religion studies and the Philip and Muriel Berman Chair of Jewish Civilization, began to examine the subjects after discovering a large number of books about quilts and Jewish women while writing her first book, which addressed uses of the past in children’s literature. She learned about the Pomegranate Guild of Judaic Needlework, whose mission is to pass needlework traditions to other generations of women and men through the sharing of knowledge and techniques needed to create handcrafted items intended for both Jewish ritual and cultural use. She is also conducting an online survey that has netted hundreds of responses internationally.

“What I’m seeing is this explosion of women wanting to talk about their creative experience,” she says. “Rather than focusing on doctrinal matters, for example, of theology or Jewish law, people are doing kind of a DIY religion. The coalescence of Jewish feminism since the 1970s and broader American trends toward topics such as crafting and food blogs have all created this era where making things beautiful coincides with a moment in Jewish feminism.”

A large percentage of Jews are not affiliated formally with a particular synagogue or official religious movement, she notes. “That’s where the future of the American Jewish community lies, not necessarily in congregational spaces but in more informal kinds of networks. I’m finding that, with a lot of women, this work is done through informal networks of other crafters, or knitting groups, or at home writing. It’s a very big part of their spiritual lives. It’s important that we look outside major institutions if we are to get a strong grasp of what’s happening on the ground.”