Skip to main content
Hussain, assistant professor of religion studies and a member of the Center for Global Islamic Studies, focuses on the period just after 1857, and Muslim reformer Syed Ahmed Khan’s reaction and writings following the Sepoy Mutiny 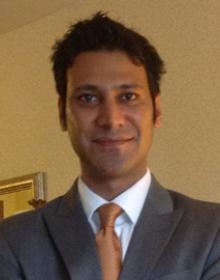 The Sepoy Mutiny of 1857-1858 was a major turning point in the development of India’s social and political movements that paved the way for the emergence of a sovereign nation. Muslim reformer Syed Ahmed Khan, one of the architects of this modern India, provided a mediatory discourse between Western modernity and traditional Islam and is the focus of research by Khurram Hussain.

Hussain, assistant professor of religion studies and a member of the Center for Global Islamic Studies, focuses on the period just after 1857, and Khan’s reaction and writings following the rebellion. In particular, he examines Khan’s role in providing a mediatory dialogue between Western modernity and traditional Islam. In the aftermath of the mutiny, Governor General Charles Canning asked whether the Muslims were bound by their faith to rebel against the Queen, and Khan’s career is a response to that question, says Hussain.

“It’s not a yes/no answer that he gives. He wants to have a critical conversation about the relationship between the British and the Muslims in India. So, today when Muslims are being asked this question in America, in general, ‘Are you secular or not? Are you Westernized or fundamentalist?’ They’re either here or there kinds of questions and what I want to get away from those kinds of questions to have a critical question about Muslims and the West. Syed Khan provides a template for that.”

Khan was a mediating figure, says Hussain. He sought to have a dialogue with the British while at the same time conversing with Indian Muslims and his writings provide a model for developing a conversation between Islam and the West.  Khan integrated Western science with the traditions of Islam when he founded the Muhammadan Anglo-Oriental College, and Hussain finds connections can be made to modern discussions.

“He was trying to get the language of science mixed in with the language of Islam so that you could learn them together rather than thinking of them as separate things," he says.

Most Western literature focuses on question of whether Islam is commensurable with Western modernity, and doing so creates incomplete understandings of the Islamic perspective, he argues.

“Everyone is trying to determine whether Islam is commensurable with the West and that leaves the discussion in a strange place. A conversation needs to take place, but that dialogue is difficult because the West does not understand Islam on its own terms.”

“Islam has values that are distinct from Western values, but commensurability is not a development question. That question cuts down the conversation. If we are going to have a conversation, we need to have a critical conversation.”