Chava Weissler was born in1947 in Washington, D.C., the daughter of a physicist (mother) and a chemist (father) who brought hard work and a sense of mission to their posts as civil servants.  Her grandparents were immigrants who each came to the United States alone, as young teenagers, from the Russian and Austro-Hungarian empires.  Among the formative experiences of her youth were attendance at Jewish summer camps, especially Camp Ramah in Connecticut, and Habonim Camp Moshava in Maryland, and membership in the Labor Zionist youth group, Habonim.  Jointly, these experiences inspired her to her single greatest intellectual achievement to date, teaching herself Hebrew at the age of 12.
As a young woman, Weissler attended Brandeis University, where she majored in Near Eastern and Judaic Studies, graduating summa cum laude with departmental honors in 1967.  She spent her junior year at the Hebrew University in Jerusalem.  As an undergraduate, she specialized in medieval Jewish mysticism and philosophy.  For her senior thesis, under the supervision of Alexander Altmann, she made an annotated translation of a manuscript of a portion of the Sefer Hokhmat ha-Nefesh of Eleazar ben Judah of Worms.
Like many young people, Weissler then entered a period of uncertainty about her future career.  The usual next step for an aspiring scholar of Jewish studies would have been to enter the rabbinical program of the Jewish Theological Seminary of America; however, women were not at that time admitted to the rabbinical program.  For this reason, she took what seemed, in those days, to be the next logical career choice: she became a secretary.  She worked at the Embassy of Israel in Washington, D.C., in the administrative, press, and agricultural offices, thus continuing to use her Hebrew, and learning about such diverse topics as making coffee for the boss, student visas, rose-growing, and containerized freight.
Eventually, however, the joys and challenges of a secretarial career paled, and she decided to learn a trade:  she attended the School of Library Service at Columbia University.  While in graduate school, she worked at the Library of the Jewish Theological Seminary, thus getting in by the back door.  In 1970, after receiving an M.S., Weissler worked at the Library of Congress, primarily in the Miscellaneous Languages section, cataloging Hebrew, Yiddish, and Albanian books.  (No, she does not really know Albanian. But there were an awful lot of “miscellaneous” languages that no one in the section knew, so everyone had to pitch in.)
The key to Weissler’s further career is that she didn’t really know Yiddish, either.  Thus, in the summer of 1974, the Library sent her to the summer program in Yiddish language run jointly by Columbia University and the YIVO Institute for Jewish Research.  She found it such a pleasure to be using her mind in an academic setting once again that she determined to return to graduate school.  In the fall of 1975, she began the doctoral program in Folklore and Folklife at the University of Pennsylvania, specializing in Jewish Folklore.  About a year into the program, Weissler developed the intellectual perspective that still informs her research.  She realized that she wished to look at Judaism and Jewish life from the perspective of a folklorist, with attention to the religious lives of ordinary people rather than elites, and special interest in ritual, food, narrative, devotional literature, and the aesthetics of everyday life.
Weissler completed her dissertation, entitled Making Judaism Meaningful: Ambivalence and Tradition in a Havurah Community, in 1982.  (It was published by AMS Press, New York, in 1989.)  The dissertation was based on participant-observation, interviewing, and other forms of ethnographic field work in a community of the Havurah (“fellowship”) movement, a variety of Jewish counter-culture with roots in the 1960s.  Weissler was interested in the ways that members constructed fairly traditional Jewish lives for themselves, despite their ambivalences about both tradition and modernity.  The study focused on the group’s worship services and discussions of the Bible, as well as a split within the community. 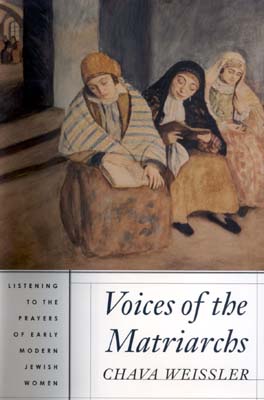 Upon completion of her degree in 1982, Weissler accepted the position of Mellon Preceptor of Modern Judaism in the Religion Department at Princeton University, where she taught until 1988. While there she began her next major research project, a study of the religious lives of Jewish women in Eastern Europe in the 17th and 18th centuries.  This pioneering project explored the devotional literature in Yiddish (the European Jewish vernacular) for women, a subject to which little previous attention had been devoted.  Weissler began this research in earnest during the academic year 1984-85, when she spent the spring semester at the Hebrew University in Jerusalem.  In the catalog of the Jewish National and University Library, she found over 900 cards for tkhines, prayers in Yiddish written for and sometimes by women.  She returned to the United States with pounds and pounds of photocopied texts.  (Important collections of tkhines are also found at the Jewish Theological Seminary Library and the Bodleian Library at Oxford University.)  The next step in the project came when Weissler spent the academic year 1986-1987 as a Research Associate in Women’s Studies in Religion at Harvard Divinity School.  There she read the work of feminist historians, and in conversation with colleagues, work out how their insights and questions could help her explore her own questions about the tkhines and their evidence about women’s religious lives.
In 1988, Weissler came to Lehigh as an Associate Professor in the Department of Religion Studies, and as occupant of the Philip and Muriel Berman Chair of Jewish Civilization.  She received tenure in 1990, and in 1990-1991, spent a year as a Fellow of the Center for Judaic Studies (then called the Annenberg Center) in Philadelphia.  There she continued work on her study of the tkhines, in the company of other scholars working on issues of women’s history in Judaism, Christianity, and Islam.  Upon her return to Lehigh, she became Chair of the Religion Studies Department, a task that banished all further thoughts of serious research until her term was over in 1994.
During a sabbatical leave in the fall semester of 1997, Weissler finally completed her book.  Entitled Voices of the Matriarchs: Listening to the Prayers of Early Modern Jewish Women , it was published by Beacon Press, Boston, in 1998.  A paperback edition was issued in 1999.  The book won the Koret Award for Outstanding Work in Jewish History for 1999, and was a finalist for a National Jewish Book Award.  Weissler was promoted to full professor in 1999, with the title of Philip and Muriel Berman Professor of Jewish Civilization.
Since 1999, Weissler has been studying the "Jewish Renewal Movement," especially the organization called "ALEPH: Alliance for Jewish Renewal." This movement strives to infuse Judaism with spirituality and creativity. During 2003, utilizing a fellowship from the National Endowment for the Humanities, Weissler observed Renewal congregations and retreat centers in Pennsylvania, New York, Colorado, California, and Washington State, and interviewed rabbis, teachers and ordinary members. In May of 2003, she delivered the prestigious Stroum Lectures at the University of Washington, sharing her insights on Jewish Renewal, and for the fall semester 2003, she was a Fellow at the Center for Advanced Judaic Studies at the University of Pennsylvania. Her book on Jewish Renewal will be published by the University of Washington Press.
Weissler loves to teach, and enjoys creating new courses.  Over her years at Lehigh University, she has been committed to teaching in such a way that students are involved in life outside the classroom, whether by observing a Passover seder, visiting a funeral home, or analyzing religious bookstores.  She also enjoys inviting students to her home for dinners or informal gatherings.  Many of her courses are related to her research interests.  For example, her most recently created course, “American Spiritual Marketplace,” grew out of her new research project, exploring the Jewish Renewal movement, and endeavoring to understand it within the vigorous marketplace in spiritualities found in America today. 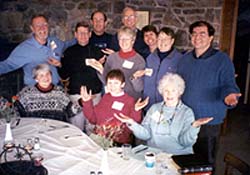 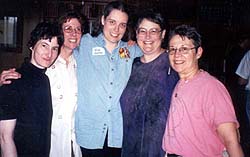 Fieldwork at Kirkridge Retreat Center              Fieldwork at Jewish Renewal Life Center
Weissler has been active in several campus organizations.  She is on the board of the Jewish Student Center/Hillel, and was a founding member of Safe Space, an organization dedicated to reducing homophobia on campus.  She has also played an active role in Women’s Studies Program and the Berman Center for Jewish Studies, and served on various campus committees.  However, she regards giving parties for the faculty and students of the Religion Studies Dept. as her most important contribution to campus life. 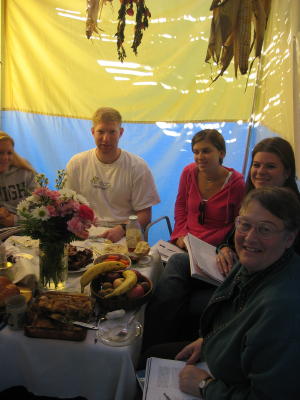 Reading courses have included such varied topics as:  Jewish Food (course included both reading and cooking), Goddesses in Mythology, and the Jewish High Holy Days. 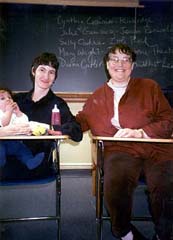