Annabella Pitkin, whose research has taken her to China, Tibet, India, and Nepal is investigating the issues surrounding Tibetan Buddhist modernity, Buddhist ideals of renunciation, miracle narratives, and Buddhist biographies. 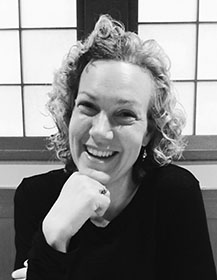 Pitkin, assistant professor of religion studies and Asian studies, tries to get at these big questions through the life of one twentieth century Indo-Tibetan scholar and yogi Khunu Lama Tenzin Gyaltsen, whose life, she says, provides an arc reflecting major ongoing changes in Asian Buddhist societies. Though never a monk, Khunu Lama is remembered as a great master both of meditation techniques and of Buddhist philosophy and Sanskrit literature, to whom even the Dalai Lama went for instruction.

“His life is a window into many of the questions that interest me about the role of religion in modern Buddhist society, the link between the past and the future, and the way that Buddhists have imagined that link. He’s also a transnational person, who lived on the border between India and Tibet and whose travels took him over thousands and thousands of kilometers. He went from what is now western China, throughout Central Tibet and all over India. He taught many Buddhists, from western Buddhists to Indian, Tibetan and Chinese Buddhists, and he helped ensure that Tibetan Buddhism was transmitted without interruption in the twentieth century.”

During her research, she conducted extensive textual analysis and translations of Khunu Lama’s writings, interviewed nearly 100 Himalayan and western Buddhists who knew him, and retraced many of Khunu Lama’s travels. By translating Tibetan oral and literary narratives of his relationships from various biographical and autobiographical genres, Pitkin explores the creative tension between two major Tibetan Buddhist ideals: the wandering hermit and the compassionate bodhisattva, and their place in Buddhist modernity. Using Khunu Lama’s life story as a starting point, Pitkin also investigates the central role of teacher-student networks for Tibetan Buddhist life and societies, considering how these relationships work in modern contexts, and how they are imagined.

“The man I’m writing about was a special kind of Buddhist virtuoso, whose whole life was about secrecy and poverty and humility. He lived like a beggar in many ways, for very conscious religious reasons of wanting to be free from greed and selfishness. At the same time he was a much sought after and beloved teacher. The way people enact their values about being a hermit and renunciate versus being a kind and generous teacher is very interesting. You can only see that when you examine the networks of actual relationships.” Studying Khunu Lama’s life thus offers Pitkin a means of understanding modernity and Buddhist social networks from a Himalayan Buddhist perspective.