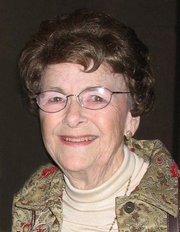 Thanks to a donor who wishes to remain anonymous, the Religion Studies department has received a grant of $50,000. This grant will be used to fund a three-day annual residency for a visiting scholar every fall semester, the Alice Eckardt Scholar-in-Residence program. The residency is named in honor of Alice Eckardt, who taught in our department from 1972 to 1987, and who still attends some of the department's programs.

Past Eckardt Scholars in Residence have been:

The 2019 Eckardt Scholar in Residence is David Morgan, professor of religious studies at Duke University, October 28-30, 2019

Alice L. Eckardt, B.A., M.A., L.H.D., is Professor Emerita, Lehigh University, Bethlehem, PA, where she taught in the Religion Studies Department.  She is a member of the Board, Executive Comittee, and Program Committee of the Institute for Jewish-Christian Understanding (IJCU) at Muhlenberg College, Allentown, PA.  She was a Senior Associate Fellow of the Oxford Centre for Hebrew and Jewish Studies, and a Visiting Scholar and Visiting Professor for several years.  She has been a member of the Christian Scholars Group on Jewish-Christian Relations since 1974.

Collecting Myself, by A. Roy Eckardt; Editor Alice L. Eckardt and Author of "Foreword." Scholars Press, 1993.

Encounter With Israel: A Challenge to Conscience, Alice and Roy Eckardt. NY: Association Press, 1970. Preface; 28 chapters; Appendix; Notes and References; Index. 304 pp. -- Review by Meron Medzini, Hadassah Magazine, May 1971, p. 18, along with review of James Parkes' Whose Land: A History of the Peoples of Palestine.

Oral Presentations - initially not published: listed first each year, followed by Publications in that same year

"Elie Wiesel: What His Writings Have Meant to Me," (a panel presentation focusing on aspects of his work prior to his Commencement address). Lehigh University, 14 April 2010.

"Has the Holocaust Been a Turning Point in Christian Theology about Judaism?" Continuity and Change: A Festschrift in Honor of Irving Greenberg's 7!11' Birthday, Steven T. Katz and Steven Bayme, eds. 2010. pp. 31-46.

Remarks to Jewish Federation of the Lehigh Valley of Pennsylvania on receipt of the Mortimer Schiff Award for Prejudice Reduction, 15 June 2007.

"James Parkes: Pioneer in the Study and Thinking about Relations of the Christian Church to the Jewish People," First Friday, Muhlenberg College, 2 November 2007. (See 2008 for enlarged final format under different title.) (This lecture was a requested follow-up to a February 26, 2007 lecture by Haim Chertok, one of Parkes' biographers.)

"The Challenge and Hope of Remembering for the Future," St. John's UCC, Coopersbug, PA, 29 September 2007.

"Growing into a Daring and Questioning Faith," Berlin, Germany (for a group on tour of significant Jewish and Christian sites), 7 September 2006.

Entries for Dictionary of Jewish-Christian Relations, Edward "Working to Transform Christian Teaching," and "Struggling with the Past to Transform the Future" are Kessler and Neil Wenborn, eds. Cambridge University Press, 2005: "Calvin, John"; "Calvinism"; "Judaism, Christian Perspectives on"; "Luther, Martin"; "Reformation."

"Growing into a Daring and Questioning Faith," with presentations from Franklin Sherman and John Merkle from and about Faith Transformed (2003), Muhlenberg College, Allentown, PA, 30 September 2004.

"Struggling With the Past to Transform the Future." [re Christian Scholars Group), Minneapolis MN, 30 Oct. 2003.

"How Are the Churches Meeting the Issue of Jews and Judaism Now?" High Neighbors Group, Presbyterian Church, Bethlehem, PA, 15 March 2001.

"How Are the Protestant Churches Responding to the Holocaust 50 Years After?" in Remembering for the Future: The Holocaust in an Age of Genocide, Yehuda Bauer, Elisabeth Maxwell, eds., Vol. I of 3 volumes, UK & NY: PALGRAVE, 2001.

"How Are the Protestant Churches Responding to the Holocaust 50 Years After?" Plenary Address for Religion and Ethics subject at International Conference Remembering for the Future: The Holocaust in an Age of Genocide., Oxford, England, 18 July 2000. ·

"Faith After the 'Final Solution'," 1 page (p.7) for large program announcement of "Remembering for the Future 2000: The Holocaust in an Age of Genocide," issued prior to the conference.

Spoke to an adult class (15-25) about Jewish-Christian relations: some historical background; what problems have there been, what has been done about them, and what remains to be done. - Mostly has little background or knowledge about any of this.  St. Stephen's UCC, Perkasie, PA

"Looking Back Over What Christians Have Said, and Considering the Results," at "The Other as Neighbor, Stranger or Friend," Institute of Jewish-Christian Understanding, Muhlenberg College, 17 November 1997.

"Looking at How Relations Have Changed in Christian-Jewish Relations," First Friday, Institute for Jewish and Christian Studies, Muhlenberg College, 7 March 1997.

"The Shoah-Road to a Revised/Revived Christianity," From the Unthinkable to the Unavoidable, John Roth and Carol Rittner, eds. Greenwood Press & Praeger (pb), 1997.

"Reformation Memories: Issues Still With Us," Jerusalem Convocation of the Christian Scholars Group and the Ecumenical Theological Research Fraternity, Israel, 17 May 1996.

"Has the Holocaust Had Any [Real] Impact on Christian Life and Theology?" Oxford Centre for Hebrew & Jewish Studies Discussion Group, 17 April 1994.

"The Holocaust, the Church Struggle, and Some Christian Reflections," Oxford Centre for Hebrew and Jewish Studies, 27 February 1994.

"Reflections and Implications," Response to Abrahamic Accord program, Muhlenberg College, Allentown PA, 17 May 1993.

Ibid., Raleigh, NC, 25 April 1993 [from Christian point of view] "The Courage to Hope and the Courage to Care and Dare," (re Holocaust, following Armenian speaker re the Armenian Massacre), Wayne State University, Detroit, Ml. 21 April 1993.

"The Content of Jewish Education and Its Responsibility Within the Jewish-Christian Encounter," Alice L. Eckardt & A. Roy Eckardt, The Jewish Academy, Glenda Abrahamson, ed. (Reading, UK and Harvard) 1993.

"The Protestant Churches During the Persecutions and the Holocaust,· Wheeling Jesuit College, W. VA, 26 April 1992.

"A Partial and Annotated Bibliography for Rethinking the Christian-Jewish Relationship," Jewish-Christian Dialogue Project of the United Church of Christ, May 1992.

"The Religious Roots of the Holocaust [or. of Antisemitism?]," for German and U.S. students, Bryn Mawr College, PA, 31 July 1991. (Organized by Interfaith Council on the Holocaust, Philadelphia & Evangelische Akademy, Berlin)

(ALE meet with planning committee for Remembering for the Future Conference to be held later in Berlin, Germany, 20-22 June 1991.)

Scholar in Residence, Muhlenberg College, 29 October- 2 November 1990: - "Biomedical Issues after the Holocausr; ·what Judaism and Christianity Share"; "Repentance, Forgiveness, and Reconciliation"; "Power and Powerlessness in Jewish and Christian Experience·: "The Impact of Nazism and the Holocaust on Palestine and Israel"

"The Place of the Jewish State in Christian-Jewish Relations," Kai/ah prior to The World Gathering of Reform/Liberal Rabbis, London, 30 April 1990. (Subsequently published in European Judaism, 15, 1, 1992: 3-9)